The National Institute of Water and Atmospheric Research (NIWA) in New Zealand has been using Hydro2de for the last 10 years. After trialling it on of a wide range of gravel-bedded braided river reaches (mean flows of 3.4 to 100 m3/s) and a large sinuous single thread river (mean flow 291 m3/s), NIWA found Hydro2de to be robust software giving good results. NIWA has since used Hydro2de to predict depths and velocities for a wide range of flows in braided gravel-bed rivers. Much of his work was to predict changes in physical habitat using instream flow incremental flow (IFIM) principles for a wide range of species and life stages from benthic invertebrates to salmonid species and including the feeding habitat of riverbed nesting birds. NIWA has also used Hydro-2de to predict flood plain inundation on the river with the highest peak flood flows in New Zealand (Buller River - peak flow 12,500 m3/s). Currently (austral winter 2005) NIWA is carrying out a flood plain inundation study on the largest river in New Zealand (Clutha River mean flow 614 m3/s).

Two-dimensional hydrodynamic models such as Hydro2de require a DEM of the domain to be modelled. NIWA has used the following techniques to obtain data on which to base a DEM:
· Traversing the domain on a grid pattern using a real time kinematic global positioning system (RTK GPS)
· Digital photogrammetry
· Airborne laser survey (ALS)
None of these techniques provide data in deep wet channels. For wet channels NIWA has used RTK GPS located echo-soundings from boats and relationships between multi-spectral ortho-photography and RTK GPS located echo-soundings to predict water depths that are then subtracted from water surface levels to provide the bathymetry of the channel.

Hydraulic resistance estimates for early models were primarily been based on measured flows and modelled water surface slopes using the slope area method. The resulting flow resistance was then applied universally to the riverbed. For flood plain models two approaches have been used. The first involves classification of the flood plain vegetation and land cover types and applying appropriate values from the literature. In the Buller River flood plain case the hydraulic resistance in the active channel was based on measured grain sizes. The second approach involves analysis of remotely sensed data to classify the ground cover and applying appropriate values from the literature to different classes.

Figure 1 shows a photograph of a reach of the Hurunui River, New Zealand, and modelled depths for the flow on the day of photography. The modelled braiding pattern faithfully reproduces the pattern evident in the photograph. 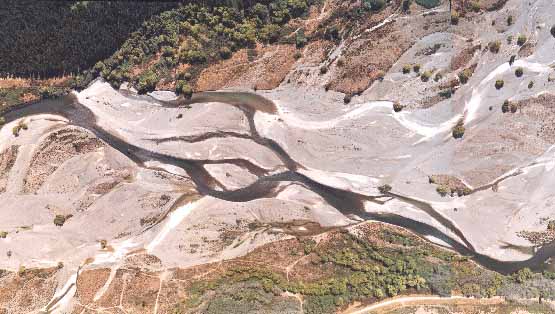 Figure 1: Comparison of photographed and modelled braiding patterns. Flow is from left to right. Flow in the photograph and model is 12.7 m3/s.

Figure 2 shows a comparison between measured and modelled depths and velocities for the Hurunui River where the model cell size was 1 m2. The depths and velocities from a runs with a range of inflows was used to predict the changes in instream habitat with flows changes for a number species and life stages, as well the suitability of various flows for different types of recreational boating (jet-boats and canoes), to help set minimum monthly flows for the river.

The model of the Buller River flood plain had a domain 12.5 km by 6.1 km and was modelled using a 7 m square grid that include the town of Westport. The model was calibrated against flood levels from a 2% annual exceedance probability (AEP) flood. As shown in Figure 3 Westport is located between the Buller River on the left and the estuary on the right and is vulnerable to flooding from either direction. The channel for normal flows is to the bottom and the left of Figure 3 and is shown in dark red colours. During large floods water spills down and old and usually dry channel to the right of the figure where it flows into an estuary. Flooding in the town and flood plain is complicated by the influence of tides and storm surge that may be as large as 0.6 m in a 2% AEP storm surge event. A large number of model runs were required to establish the AEP of floods in the town. The full domain for 1% AEP inundation event in Westport is shown in Figure 3. Figure 4 shows flood depths for that event in Westport. The peak river flood discharge for the event was 9400 m3/s. In this modelled event 28.2% and 18.4 % of the town was flooded to depths of >0.05 m and >0.2 m respectively.

The model was used to explore mitigation options against the 1% inundation event. A series of low flood banks around the perimeter of the town was able to prevent flooding for a 1% AEP flooding event.

Hydro2de has proven to be an easy to use and robust model. It has served NIWA well in providing modelled depths and velocities for IFIM type instream physical habitat modelling and for flood inundation modelling.
Courtesy NIWA, 05-2005
Back ¦ Home